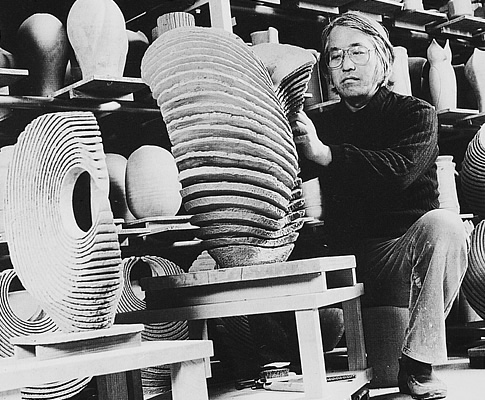 He studied carving and sculpture while he was student. After graduation, he studied under his father, Toshu Yamamoto who was a Living National Treasure. When he became independent, he pursued the possibilities of the 'clay', and invented techniques called 'Tatakikomi' and 'Shussai' (patted colored clay onto pottery).
When he discovered the clay from Bourgogne, France, he established a style of novel and unconventional form of pottery, called 'Tsumiage', a technique of piling up plated clay. His work is based on the inherited Bizen pottery, though he adopts new ideas onto the tradition. He still is an active potter.

·To the next generation

Izuru Yamamoto's two sons (Shusaku, Ryosaku) succeed his father's technique and adopt new ideas with their own sensibility and they are expected to be a part of the next generation of Bizen potters.

Born as the fourth son of Toshu Yamamoto who was a Living National Treasure.

Studied at Ecole des Beaux-Arts, Paris Department of sculpting,
studied and lived there for 2 years.

After the return from abroad, started to study pottery under his own father who was a Living National Treasure of Bizen ware.

Became an independent potter and made his own kiln in Imbe, Okayama and started to establish his unique technique of 'Tatakikomi' (patting the pottery in a unique way).

Became a member of the Japan Kogei Association. (Arts and Crafts Association)

Collaborated with Serge Fribault, a chef of Lenotre and held an event, 'Eat French' using his pottery in Tokyo.

Received a prize at the 27th Exhibition of Japan Kogei Association for the piece, 'Bizen Tatakikomi Baimon Obachi' (pattern of Japanese plum blossoms on a large bowl).

Established his own technique, 'Shussai' (colorings).

Received a prize at The China and Japan International Pottery Exhibition for his 'Bizen Clay Shussai Obachi'.

Invited to exhibit the awarded 'Bizen Tatamikomi Baimon Obachi' at The 30th Anniversary Exhibition of The Japan Kogei Association.

Received a prize from the Japan Kogei Association.

'Bizen Yohen Hanaire' (a flower vase with kiln effects) was housed at The Brooklyn Museum, USA.

Exhibited at 'Modern and Ancient Pottery, Discovery of Clay' of The Shigaraki Ceramic Cultural Park.

Became a judge of The Japan Kogei Association of Chugoku Area.

Discovered the clay of Bourgogne.

Worked at a castle in Yonne, Bourgogne, France.

Invited to exhibit 'The Return of Bizen Pottery' in Tokyo, Hiroshima, and Okayama held by the Sanyo Shimbun Company.

Invited to exhibit in Bandol, Provence, France and invited for potters exchange meeting and forum as a lecturer.

Received an award from the Tabe Museum for 'Yugo No Chu' (Union of Universe) made with clays of Bizen and Bourgogne by 19th 'Cha no Yu Exhibition.'

Received an award from the Tabe Museum

Received an award at the 2nd Kikuchi biennale with tsumiage flower vase, 'Hoyo' (W56.8xD42.5xH68.2cm) made with clays of Bizen and Bourgogne.

Received an award from Kikuchi biennale

Yonne, Bourgogne newspaper, with the work at a castle. 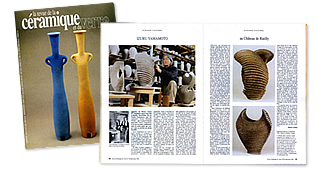 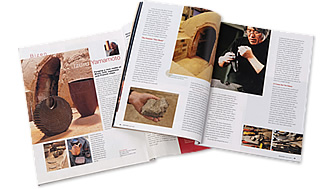 Piling plates of clay, mixed with Bizen and Bourgogne. 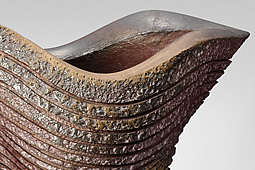 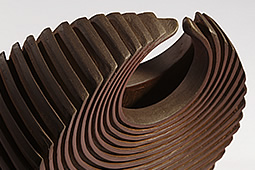 Kneading pigment into the clay and put onto the body of work. 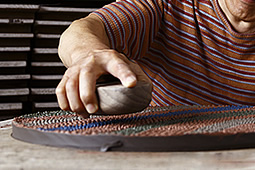 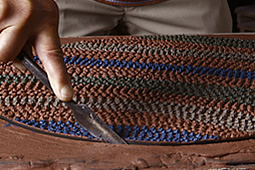 Izuru Yamamoto discovered the clay of Bourgogne. It contains ingredients 'kaolin' similar to Bizen clay. It is smooth and it does not shrink less than Bizen clay when it is baked. Mix of Bizen and Bourgogne clays enabled to establish the technique of Tsumiage. The advantage of the mix of clays carry the tradition with the smooth surface of the work. 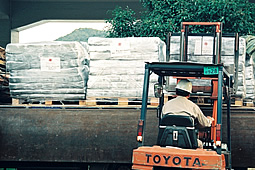 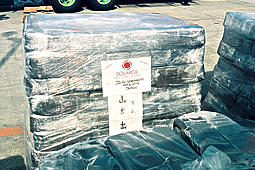 Contact us by email about the work of Izuru Yamamoto.